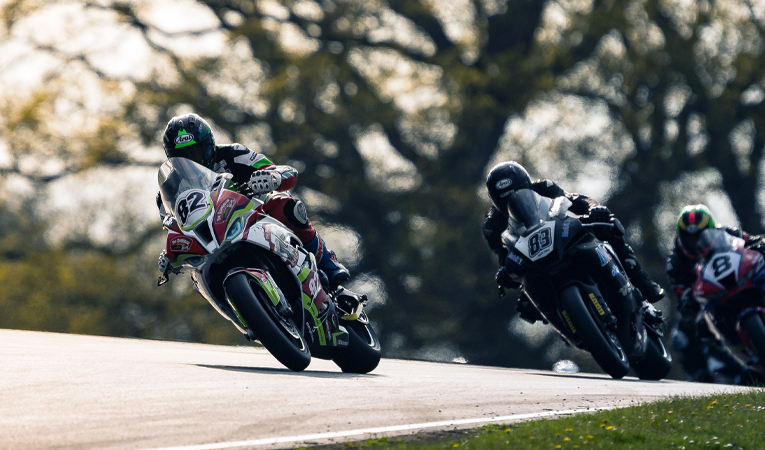 Derek Sheils and Richie Ryan got their 2022 Dunlop Masters Superbike Championship campaigns off to winning starts at Mondello Park on April 23rd and 24th as they shared the top two spots across the opening three rounds of the series. In front of a packed house the Superbike stars traded wins and fastest laps on a weekend where a number of records were broken.

Sheils took pole for race one on his brand new Roadhouse Macau BMW ahead of UK visitor John Ingram with his Fleetwood BMW and reigning four time champion Richie Ryan from Kilkenny with his Mobil-1 Yamaha. Shiels got away brilliantly in race one and had built a sizeable lead by the end of lap two when the race was stopped due to a crash for Ingram which unfortunately put him out for the rest of the weekend.

On the restart Sheils again led, with pressure coming from behind from Ryan while Dubliner Thomas O’Grady on his EICL Yamaha and the unrelated Emmett O’Grady from Kerry, on his TAG VTL Honda, fought over third. As Sheils cruised to the opening win of the season ahead of Ryan, the O’Grady’s swapped places right to the flag. On the final lap Thomas tried to ride right around the outside of Emmett at Southside Corner but just lost out on the podium by two thousandths of a second.

Sheils mad a slow start in race two which left him third in the early laps behind surprise performer of the weekend Alan Kenny. The Cavan man, on his Yamaha R1, had finished seventh in race one but made a huge leap forward in race two to run second early on. By the end of lap two Sheils was by Kenny and began to close on Ryan, setting the fastest race lap on the way. In the end he ran out of laps as Ryan opened his 2022 account. Kenny held on for third ahead of Thomas and Emmett O’Grady.

Race three was more straightforward for Sheils who got away ahead of Ryan and Thomas O’Grady with Kenny close behind. On lap two Kenny moved up into third and held on to complete and excellent weekend by taking his second podium behind Sheils and Ryan.

The Superbike Cup class was the fastest it has ever been with Jamie Collins setting a new class lap record. Corkman Collins with his Suzuki and the BMW of Andrew Whearty from Meath traded the lap record all weekend as they battled for top spot in the Cup with the verdict eventually going to Collins. Collins took two victories to Whearty’s one while Ulster rider Stephen Magill took all three third places on his return to the series.

In Supersport Donegal’s Caolán Irwin and Oisin Maher from Tipperary, took the top two spots just ahead of former MotoGP and BSB rider, Chris Burns. Maher led the opening lap before Irwin moved by, but he could not shake off his younger rival as they finished less than a second apart. Burns came home third but that would be the best his weekend would get as a crash in race two put him out for the weekend. The first Cup race of the year went to Tralee’s Jack O’Grady from Burns teammate A Jay Carey and fellow Ulster rider Gary Scott.

In race two Irwin led away but Maher got by on lap four before a small mistake saw him crash out and miss the third race of the weekend. Irwin again took the win, ahead of the top two in the Supersport Cup, Carey and O’Grady. Race three saw Irwin took an unexpected hat-trick from Supersport debutant, Cavan’s Shane Connolly and first time Cup winner Dean Lacey, from Wicklow. Scott took second in the Cup from Carey to leave the top four in the Cup championship, Carey, O’Grady, Lacey and Scott separated by just twelve points.

In the Principal Insurance Twins race, Waterford’s Brian McCormack took the first Irish win for the new Aprilia RS660. McCormack’s Tramore neighbour, teenager Reece Coyne, took second on his twins debut but a crashed out of the event in race two. Thomas O’Grady made it three Aprilia’s on the podium in race one and then followed McCormack home in the next two races to cap off a busy weekend for the Dubliner, while McCormack also added a new Supertwin lap record to his achievements. William Roberts and Mark Quilligan each filled the third podium slot once. The Production class saw Brandon Kavanagh take the first win, before Nathan McGauran took over to win the next two, with Robert O’Connell and Gareth Morrell also making the podium.

An increased grid for the DM Groundworks and FJS Plant Junior Championships saw six Meath’s Jack Whearty emerge as the class of the field as he took his first wins in the class. Whearty took all three victories ahead of Antrim’s Nicky Burns with Callum Clint taking two third places and Tom Pierce one. The concurrent Moto1 races all went the way of Reuben Sherman-Boyd who was another to also take home a lap record. Sherman-Boyd was followed home by Bailey Dobson and Robert O’Neill in all three races.

The new for 2022 Future Stars Championship got off to a very competitive start with a number of riders securing large point hauls. Nathan McGauran leads the way following two wins and a third, followed by Supersport racers A Jay Carey and Gary Scott and Moto400 rider Jeff Quilter. The Future Stars are competing for an end of season prize fund provided by Junior class sponsors, DM Groundworks and FJS, along with Sorcon Plant and additional funding from the Irish Motorcycle Supporters Club.