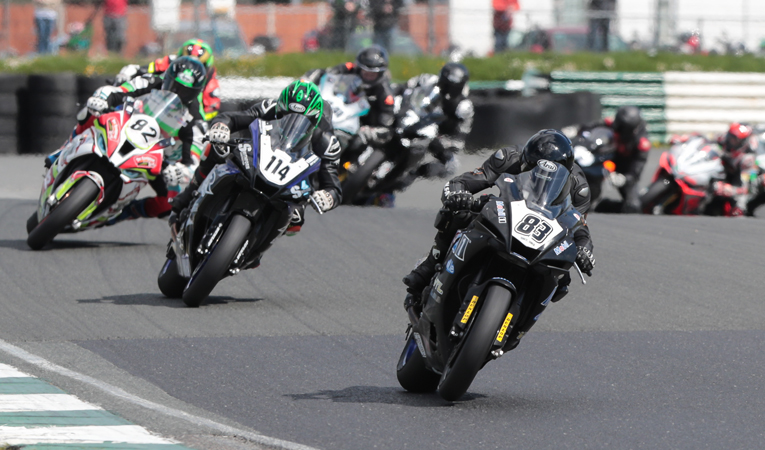 Ireland’s biggest Motorcycle Race Series, the Dunlop Masters Superbike Championship recommences its 2022 title fight this coming weekend (May 21st & 22nd) with its first visit of the season to the full Mondello Park International Track with fans now able to follow all the action on a Large Screen.

The two days of racing will see rounds four, five and six of the growing championship completed with the Superbike and Supersport classes heading the twenty seven race programme. Saturday’s timetable also includes the first 2022 visit to Mondello Park by the FIM MiniGP Ireland Series, the Irish portion of the FIM’s World Championship for ten to fourteen year olds.

The Dunlop backed series had a fantastic start to its season back in April, attracting increased competitor and spectator numbers and seeing the re-introduction of the series’ livestream, sponsored by Maxus and the Harris Group. With interest continuing to grow, this weekends’ event is shaping up to match the season opener.

The availability of race coverage on the Sunday of the event has enabled a new innovation for this coming weekend. For the first time the series will offer spectators the opportunity to follow the racing around the entire 3.5 kilometre International Track, from the comfort of the main straight grandstand, as a large screen will be in place, sponsored by Megabikes Superstore Ballymount. The double sided screen will be visible from the stand and the spectating areas at turn one, as well as from the Mondello Park paddock and should make the fan experience the best it has ever been at the Masters.

The battle for Superbike honours could not be any closer than it is heading into the second weekend of the season. Derek Sheils leads quadruple champion Richie Ryan at the head of the Superbike standings with the pair having shared the three wins in April, Sheils taking two to Ryan’s one. Caolán Irwin leads the Supersport standings but with him and Oisin Maher away on British Championship duty the way is open for Supersport Cup stars AJ Carey and Jack O’Grady to improve on their second and third places. UK visitor Chris Burns will also be out to make up lost ground after a race two accident in April put him out of the rest of that weekend.

With more than 180 entries across the Masters classes and the addition of the FIM MiniGP riders, the paddock will be extremely busy, as will the timetable. Following Saturday morning qualifying for all classes, the MiniGP riders will race three times on Saturday, with all other classes racing at least once. For Sunday the DM Groundworks and FJS sponsored Junior Classes will join in with their qualifying and three races, while the remaining two races for all other classes take place.

Tickets for the Masters Superbike Championship can only be purchased on-line and this can be done through the championship web site, www.masterssuperbike.ie, where all of the event information and links to the event timetable and on-line event programme can be found.