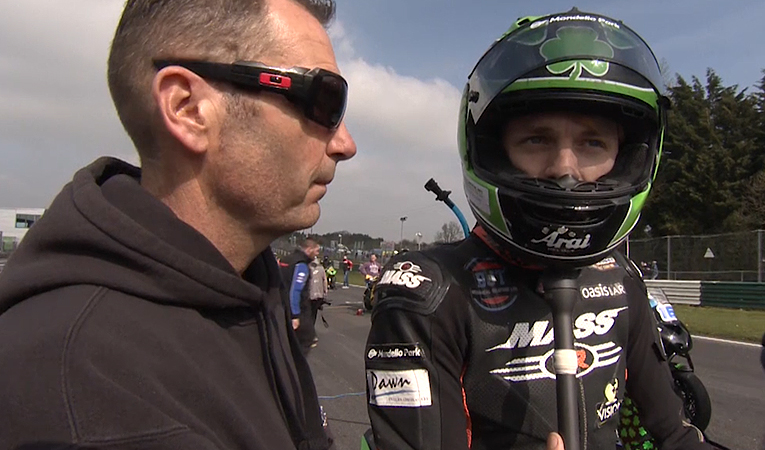 2018 Masters Superbike Championship ‘Young Racer of the Year’, Caolán Irwin, kicked off his 2019 season with a strong performance at the opening round of the British Superstock 600 championship at Silverstone on April 19th to 21st. The impressive Donegal youngster was competitive throughout the weekend, on his brand new and untested Kawasaki, and left the Northampton track full of confidence for the season ahead, despite an accident early in the race which brought his weekend to a premature end.

The Donegal native will contest the extremely competitive British Superbike Championship support series with backing from the Young Racer Award sponsors, Dawn International, Mondello Park and EICL and will also have the support of the British Superbike Championship organisers. The total value of the backing provided to Irwin by the Young Racer Award during 2019 will be over €14,000.

Following a late decision to switch to a new Kawasaki, Caolán arrived at Silverstone with an untested bike which was only completed in the Silverstone paddock the day before the event. With an all new suspension package still to be set up and his quick shifter not operating, Caolán’s practice and qualifying results were extremely impressive. Building his speed across each session, the Kilmacrennan based racer produced and incredible Qualifying time, under the circumstances, to line up fifth, less than six tenths off the pole sitter.

Come race time, Caolán made a strong start, getting away with the leaders and slotting into fifth place. Building his speed the Young Racer winner had just set his fastest time on lap four, when a small mistake as he lined up a pass for fourth place, led to him sliding off and out of the race. Despite his early exit, fifth in qualifying and third fastest race lap, just over a tenth of a second off the fastest, left Caolán very happy with his weekends progress and looking forward to the rest of the season.

Despite his crash Caolán expressed his satisfaction with the result of his opening weekend at the BSB, “That was a really positive weekend for me and the team. Coming here with an unfinished and unfamiliar bike, we thought we would be doing well to get into the top fifteen in qualifying and top ten in the race but we made excellent progress right from the start. Competing at this level is made so much easier by the support of the Young Racer programme and I’d like to thank Mondello Park, Dawn International and EICL as well as all of my other sponsors for their help in getting me back on the grid this season. Having shown such good pace this weekend I know I’ll be right in contention when we get to Oulton Park in two weeks time.”

Caolán Irwin will be back in action in the British Superbike Championship for Round 2 of the National Superstock 600 championship at Oulton Park on May 4th and 5th.