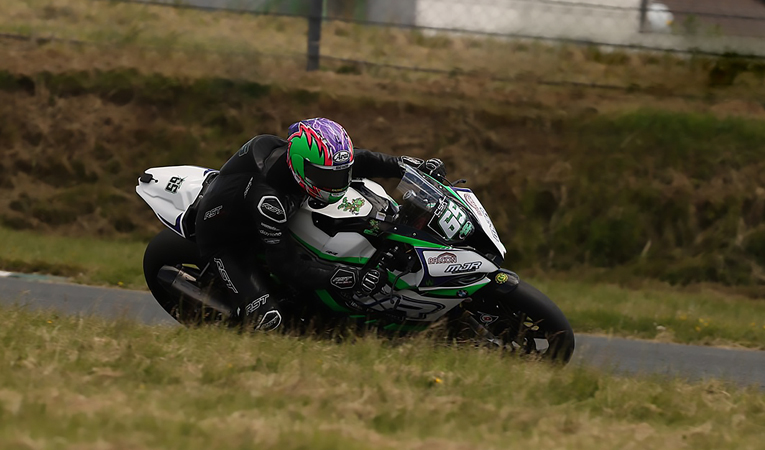 The Dunlop Masters Superbike Championship was thrown wide open at Mondello Park on Saturday and Sunday July 24th and 25th. Two non-finishes for Championship leader Richie Ryan and one for Derek Sheils, allowed the ever improving Michael Sweeney to leap-frog them both to take an eight point championship lead.

The Dubliner had started the season without a single Masters Superbike podium but has now taken five in a row, topped off by a trio of second places this weekend. Having started the event fourth in the standings, eighteen points behind Ryan, Sweeney now leads the triple champion by seventeen, with Sheils also overtaking Ryan to move into second.

Saturday’s Race 1 was one of the easiest of Richie Ryan’s career as the Kilkenny man took a nine second win over Sweeney while Sheils dropped out with Electrical issues. Kerryman Emmet O’Grady took his first podium on the 2021 TAG Honda, just holding off Dublin’s Thomas O’Grady after a race long battle.

Ryan again took the lead at the start of Race 2, on Sunday, but had an uncharacteristic crash at turn three leaving Sheils to take his second win of the season with Sweeney again second and Thomas O’Grady beating the unrelated Emmet O’Grady to the final podium spot. Ryan started the warm up lap for race three but did not take the start due to an issue caused by his earlier crash, leaving Sheils to take another win. Sweeney was initially comfortable in second but both Thomas and Emmet O’Grady caught him with two laps to go. The new championship leader held on from Thomas, but Emmet crashed out on the final lap, while pushing hard to get back on the podium.

The Superbike Cup class was won by Cavan rider Shane Connolly. One of the fastest in pre-season testing and at the June event, Connolly had failed to finish any of the opening three rounds but made up for it with three dominant victories as he ran amongst the Pro riders. Evan O’Grady from Tralee left Mondello Park as the Cup Championship leader having taken three podiums, with fellow Kerryman Dean O’Grady second and Ulster rider Daniel Matheson, who took his first podium of the year in race three, third, just two points ahead of the impressive Connolly.

The Supersport Class was a Kevin Keyes benefit with the Offaly based former British Championship racer taking a trio of wins, ahead of Mike Browne, to extend his championship lead. Corkman Browne, pushed hard all weekend to close the gap but had to settle for three runner up spots to move to second in the standings. The final step of the podium was shared between Andrew Murphy, with two third places, and Michael Owens with one. Highly impressive Tipperary teenager Oisin Maher took the fight to the leaders in all three races but failed to finish each time due to mechanical issues.

The Supersport Cup class had three different winners as Cork’s Jamie Collins took races one and three, with fellow Corkman Stephen Tobin taking a maiden class win in race two. Collins has a healthy lead in the Cup championship now from a trio of riders, Tobin, Robert O’Connell and Eoin O’Siochru, who are locked together in joint second place.

The Principal Insurance Pre-Injection races produced three wins for Ian Prendergast but none of them were straightforward. In all three the Tipperary rider was locked in a battle with former Champion Darryl Sharkey, the experienced Paul O’Donoghue and impressive newcomer Noel Dunne Jnr. At the end of the weekend it was Prendergast who lead the championship standings from Cavan man Sharkey and Carlow’s Dunne.

The DM Groundworks and FJS Plant Junior categories saw Waterford youngster Reece Coyne extend his championship lead with his third and fourth wins of the season. In race two a mechanical failure for the Tramore rider put him out immediately after the start allowing Ajay Carey to take the other win. In Moto1 the championship was thrown wide open by disqualification for two riders due to technical infringements and with one of them being series leader Josh O’Brien, Donal O’Donovan now leads the way ahead of Aoife Griffin.

In the other classes Michael Sweeney took a trio of Supertwin wins, Darragh Crean won twice in The Production Twin class while Terry Bradley took the third race. Chris Campbell returned to the Classic Superbike series and dominated all three races while Stephen Tobin backed up his Supersport Cup win by making it six victories from six races in The Moto 400 category. Mark Codd and Liam Gordon were followed home by Darren O’Dwyer and Mark Gash in all three sidecar races.

The Dunlop Masters Superbike Championship calender continues at the end of August with three more rounds, this time on the Mondello Park International Track.