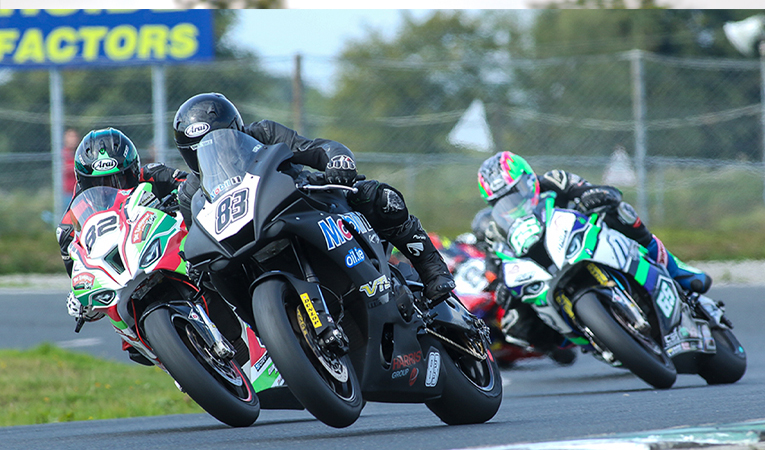 Rounds seven, eight and nine of the Dunlop Masters Superbike Championship produced the closest Superbike racing of the season as the championship battle intensified on the Mondello Park International Track. Former Champions Richie Ryan and Derek Sheils shared the wins but had to fight harder than ever to take their victories as the gap to their main challengers continues to close. Despite the closeness of the Superbike battles it was Supersport that produced the tightest result as a photo finish was required to separate Kevin Keyes and Michael Dunlop in their final race of the weekend.

Returning from injury, Portadown’s Luke Johnston was instantly back to his best as he took pole position for race one, ahead of Kilkenny native Richie Ryan and Dublin’s Thomas O’Grady. Championship leader Michael Sweeney took fourth place to line up on row two.

The first attempt at a start only got as far as turn one as a coming together between four of the front runners brought out the red flag. Luke Johnston initially led the shortened re-run but was passed by Ryan at half distance. Going into the final lap Ryan led from Johnston with Thomas O’Grady third and Derek Sheils fourth, having moved through from last on the grid following problems in qualifying. The action was not over however, as both O’Grady and Sheils found a way past Johnston on the final lap to pick up second and third, with the top six bikes separated by three seconds at the flag.

Race two produced an even closer battle despite losing Johnston to a Sunday morning warm-up crash. Ryan lead initially but he could not open a gap as Sheils, Thomas and Emmett O’Grady, Michael Sweeney and Carlow rider Edd Comerford closed right in. The group swapped places almost every lap with the biggest changes coming on the penultimate one. Comerford crashed out at the first turn just as Sheils grabbed the lead from Ryan who was then under pressure from Thomas O’Grady. O’Grady slipped past on the final lap and then almost caught Sheils on the line to finish off the best Superbike race seen at the Masters Championship for many years. The top two were separated by two tenths of a second at the flag, with Richie Ryan holding on to third ahead of Emmett O’Grady, Michael Sweeney and Antrim’s Ross Irwin.

The competitiveness of the grid was demonstrated by the line-up for race three. Fastest lap in race two gave Sweeney pole, with Emmett O’Grady taking his first front row start of the season in second and the two race winners, Ryan and Sheils, only managing third and fifth. Sweeney and Sheils made the best starts to sit one and two at the end of the opening lap ahead of Emmett O’Grady, Ryan and Thomas O’Grady. Sweeney’s first Superbike lead lasted two laps before a lack of rear grip saw him gradually drop back to fifth. Sheils took over as Sweeney slowed but the recovering Ryan worked his way to the front on lap four and proceeded to take his second win of the weekend from Sheils. Thomas O’Grady completed a hat-trick of podiums while Emmett O’Grady rounded out his best weekend of the season with another fourth place.

Stand out Superbike ‘Cup’ performer Shane Connolly from Cavan spent his weekend battling with the Pro racers as he took three Cup wins to move up to second in the points and back into championship contention. The Championship top two were left in Connolly’s wake with Kerryman Dean O’Grady’s trio of runner up places not enough to hold on to second spot, while two third places for Evan O’Grady meant he stayed just ahead of Connolly. Meath’s Andrew Whearty took his first ever Superbike Cup podium in race two.

The presence of Michael Dunlop on the Supersport entry list was a big attraction for many of the fans in attendance and he did not disappoint. Having made a very slow start to race one the Ulster rider was seventh at the end of lap one, but a string of near record pace laps saw him less than a second of race and championship leader, Offaly man Kevin Keyes, at the flag. Andrew Murphy came home third ahead of Thomas O’Grady and Michael Owens with the Supersport Cup winner, teenager Scott McCrory, sixth. In race two Keyes got away in the lead but Dunlop once again closed him down and gabbed the victory with an impressive move at the final corner. Mike Browne came home third with Jamie Collins taking the first of two ‘Cup’ wins.

Keyes and Dunlop kept the best till last as they were never separated by more than a bikes length throughout race three. Keyes led for a lap before Dunlop took over. Going onto the final lap they were still nose to tail and Keyes waited till the very last opportunity to make his move, diving up the inside at the final corner. The Offaly rider ran wide and was slower than he wanted to be down the straight allowing Dunlop to pull alongside but the Series leader was given the verdict by the width of a tyre in a photo finish. Andrew Murphy again took third having grabbed that position from youngster Oisin Maher on the final lap. The results mean that Keyes has extended his lead over Browne at the top of the championship and could clinch the title at the penultimate event in September.

The Principal Insurance Pre-Injection races were dominated by Ian Prendergast who won all three from relative newcomer Carlow’s Noel Dunne Jnr. Dunne led races one and three but could not hold his more experienced rival back as the Tipperary man took three victories and extended his championship lead over former champion Darryl Sharkey and Dunne.

Building on his impressive recent appearance in the Junior class at the British Superbike Championship, Tramore’s Rhys Coyne dominated the DM Groundworks and FJS Plant Junior Supersport division once again taking three wins over Ulster rider A Jay Carey. Jack Whearty and Darragh O’Mahony were the only other riders to make the podium. In the concurrent Moto 1 class Lee Hara took two wins from fellow Ulster teenager Reuben Sherman-Boyd.

The Dunlop Masters Superbike Championship returns to Mondello Park for its penultimate event on September 25th and 26th, where the championship will have three more rounds on the shorter National Track layout.