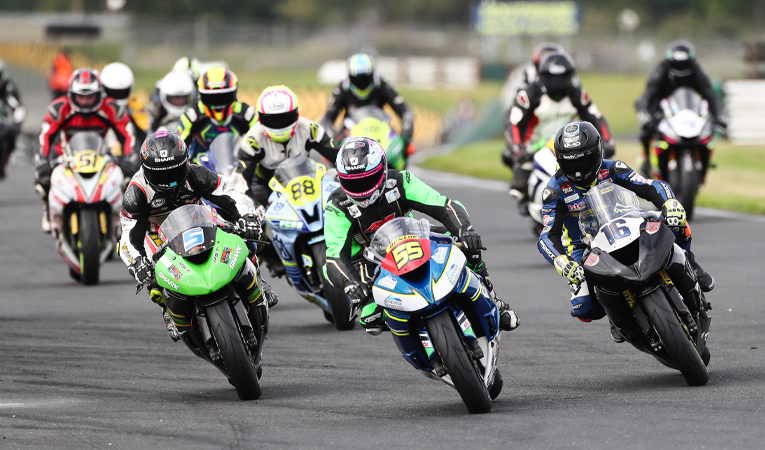 The Dunlop Masters Superbike Championship heads for the Mondello Park National Track this Saturday and Sunday, October 9th & 10th with ten of the twelve title fights still to be settled. Never in the history of the championship has so much been up for grabs on the final weekend of the season.

The shortened 2021 Masters Superbike Championship campaign comes to a close this weekend following a five event season condensed into just seventeen weeks. The shorter season has produced a more unpredictable outcome than normal, with just two titles secured so far. The Supersport crown has been lifted by Offaly’s Kevin Keyes while Corkman Stephen Tobin has retained his Moto 400 crown.

Despite a season where he was pushed harder than ever before the September Masters saw Kilkenny’s Richie Ryan emerge as the favourite to secure an unprecedented fourth successive Superbike title. Mechanical issues and crashes for all of the front runners have allowed Ryan to overcome his own non-finishes to build a healthy lead heading into the final triple header. Dubliner Thomas O’Grady has emerged as Ryan’s closest challenger and one slip up from Ryan could allow O’Grady the chance to make a claim for the title. In the Superbike Cup a three way battle between Kerry riders Dean O’Grady and Evan O’Grady and Cavan’s Shane Connolly, will more than likely go down to the final race on Sunday afternoon before it is decided.

While Kevin Keyes has secured the top spot in Supersport and Limerick man Andrew Murphy is almost secure in second, the Supersport Cup is yet to be finalised. Both Jamie Collins and Scott McCrory have been battling near the front of the overall grid all season and are now the only two left standing in the battle for Cup honours. With Keyes likely to miss the event, due to an injury sustained at Donnington Park’s BSB round last weekend, the way could be open for one of the Cup racers to join the exclusive list of Cup riders who have won a Supersport race outright.

The most interesting fight over the weekend could be the Supertwins shoot out. With an extra race being added this weekend to make up for the one not run in September, Kevin Baker from County Clare and North Dublin’s Michael Sweeney will have a busy weekend as they fight over the top spot in the faster Twins class. The top two have won all of the races this season and currently are separated by just five points. Darragh Crean will make the trip from Kerry with a healthy Production Twins points lead over season long rival, veteran Dubliner Terry Bradley. Bradley will have to beat Crean in Saturday’s race one to take the championship battle through to Sunday’s final day.

The Principal Insurance Pre-Injection class has two former champions still in with a chance of regaining the crown, but it will be Tipperary’s Ian Prendergast who will start as the strong favourite. Prendergast holds a large lead over Darryl Sharkey with the Cavan man needing his rival to have a particularly poor weekend if he is not to pick up the six points he needs to take the title.

Also up for grabs this weekend are the DM Groundworks and FJS Plant Junior titles with a very real chance that Masters history could be made in Moto1. Aoife Griffin is all set to become the first female Masters Champion and all she has to do is finish race one to claim that accolade. In the faster Junior Supersport class Reece Coyne is aiming to add this trophy to the Junior Cup one that he won in 2019 and will need to simply finish in the top three in race one to do so. Also set to be decided over the weekend is the destination of the Classic Superbike Championship and the Sidecar title.

Three Championship rounds will be run for each class over the two days of the Masters finale apart from Twins. Following Saturday morning qualifying. racing gets underway in the afternoon beginning with the additional rescheduled Twins race. All classes will race at least once on Saturday with the final two rounds of the season on Sunday. Tickets for both days can be purchased from the Masters Superbike Championship web site, www.masterssuperbike.ie.