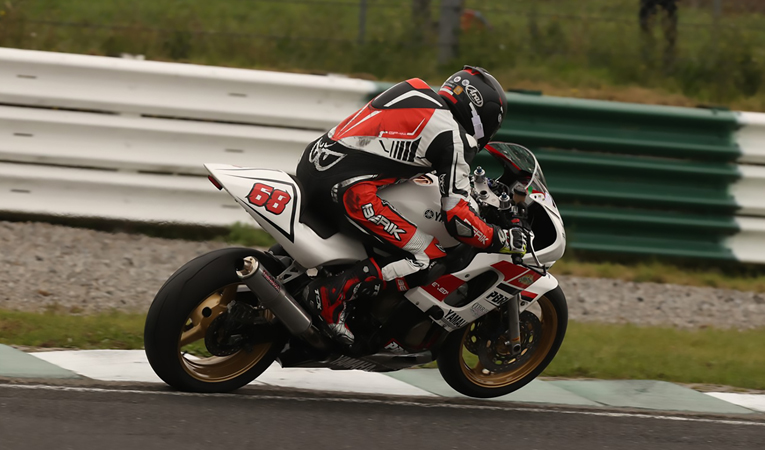 While the headline Superbike and Supersport classes attracted most of the attention at last weekend’s Masters Superbike Championship finale at Mondello Park, there were a number of other championships also decided, with each delivering its own excitement. History was made in the Moto1 class as teenager Aoife Griffin became the first female rider to take a Masters crown while fellow Cork resident Stephen Tobin acheived the rare feat of going an entire season unbeaten in the Moto 400 class.

The Principal Insurance Pre-Injection championship had been dominated since July’s round four by Ian Prendergast, but the Tipperary man was missing from the grid for Saturday’s race one. In his absence Paul O’Donoghue took the win from Noel Dunne Jnr. with Darryl Sharkey third. Cavan man Sharkey needed to finish one place higher to keep the title fight alive, so despite his absence Prendergast took his second Pre-Injection title without turning a wheel.

The fact that the championship was decided did not mean that the action was over as Prendergast re-appeared for Sunday’s race two. Starting from the back of the grid the champion aimed to re-assert his dominance and moved through into the lead by lap four. O’Donoghue however was not about to let Prendergast have it all his own way as they battled all the way to the flag. O’Donoghue set fastest lap as he closed on Prendergast but ran out of laps and had to settle for second with Dunne coming home third. With their first and second positions secure neither Prendergast or Sharkey appeared for the season finale leaving O’Donoghue to take the win from Dunne and first time podium placer Eoin Leavy. 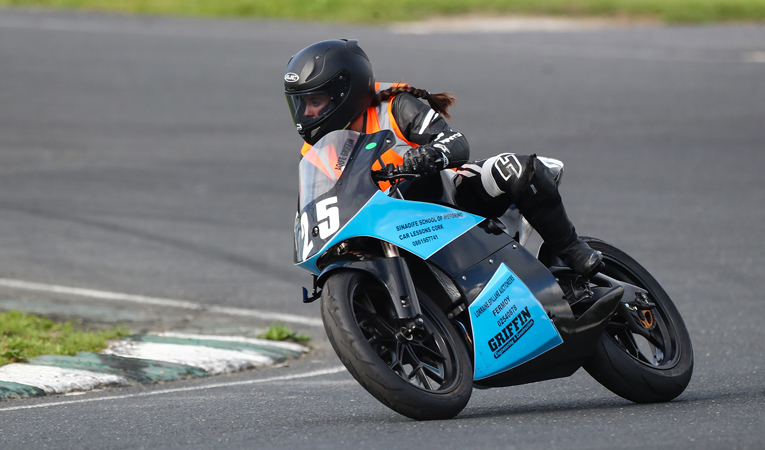 History was made in the DM groundworks and FJS Plant backed Junior championship. Racing in the Moto1 class, Cork teenager Aoife Griffin became the first female Masters Champion. In her first season racing, the youngster improved all season and finished consistently, while her rivals did not, to take a debut championship win. In the concurrent Junior Supersport class Waterford’s Reece Coyne continued to progress, as he secured the championship on Saturday following a measured second place finish behind Ajay Carey, with Jack Whearty third. With the championship sown up, the teenager pushed harder in races two and three as the top two riders consistently broke the lap record. Coyne finished the weekend with three runner-up positions, as he could not get the better of the fast improving Carey, but had the honour of being the first Junior Supersport rider to lap Mondello Park in under a minute, as he smashed the lap record in race three. 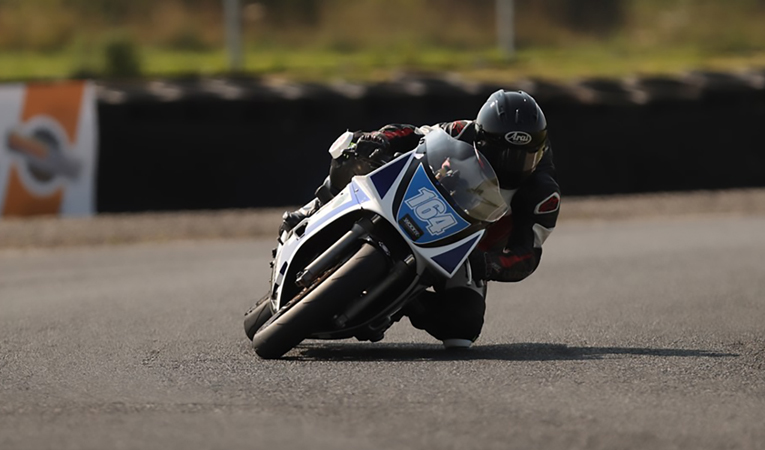 Cork veteran Stephen Tobin added his name to the very short list of riders who have gone through a season unbeaten when he took another hat trick of Moto 400 wins. Behind him Jason Floody took two runner-up places to secure second in the championship with Ben Mullane and Michael Carr also making the top three across the weekend.

Having lost a round to the weather at the September event, the Twins classes had four races to contest over the weekend and the first of those took place on a wet track. The change in conditions saw Michael Gillan join the championship contenders Michael Sweeney and Kevin Baker in the lead battle. Sweeney needed to beat Baker to move ahead in the championship and having led initially was happy to concede to Gillan in order to keep Baker at bay. In the final few laps the gap to Baker grew allowing Sweeney the chance to close back in on Gillan and take the win, along with the championship lead. 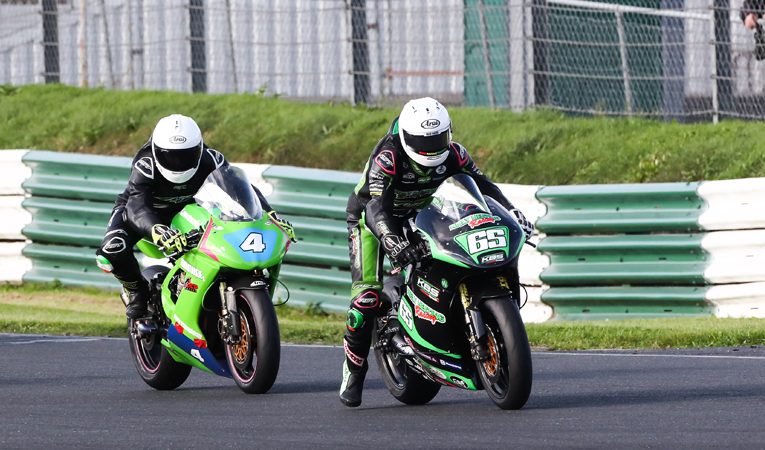 The championship battle came to an abrupt end in Saturday’s second race as Baker fell on the warm up lap and was unable to race for the remainder of the weekend. In his absence Sweeney was able to cruise to the title with three more wins ahead of Gillan, with class newcomer Ajay Carey third on one occasion and Richie Ryan taking the spot in the other two races.

The Production Twin class had been a battle all year between Darragh Crean from Kerry and Dubliner Terry Bradley. Crean took the opening race win from David Duffy, with Dillan Daly just pipping Bradley at the line to make the podium for the first time. Bradley’s unusually low finishing position meant that Crean only needed ten points in race two to be crowned champion. Dillan Daly followed up his podium with a maiden race win in the second encounter, ahead of David Duffy with Bradley third. Crean tracked Bradley all race to secure his first title, with two rounds to spare, before opting out of the remaining races. With his season long rival missing Bradley got back to form to take two wins in Sunday’s races. Duffy and Daly were second and third in race three with Gareth Morrell and Daly filling the podium places in the final race.

Classic Superbikes saw Jamie Nugent take a debut win in Saturday’s wet race while Liam Dunne took the penultimate encounter and James Kelly finally grabbed a long overdue win in the last race of the season,. None of that made any difference to the destination of the title, as Michael Prendergast took three safe finishes to maintain his championship advantage over Liam Dunne and Liam’s father Noel. The sidecar title was also decided on Saturday as second place in the penultimate race of the season, behind their season long challengers Darren O’Dwyer and Mark Gash, gave Mark Codd and Liam Gordon a first sidecar crown.