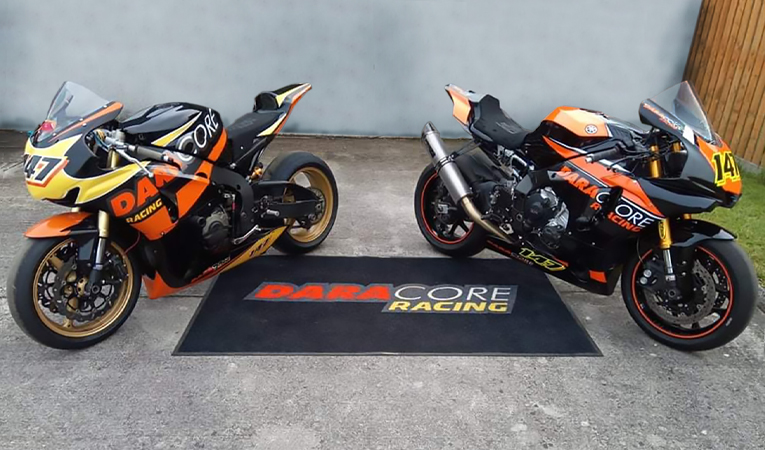 Kildare based International Concrete Drilling and Sawing experts, Daracore, have announced their continued involvement with the Dunlop Masters Superbike Championship, as they renew their partnership with Ireland’s biggest Motorcycle Racing series for third season. Daracore will also continue to compete in in the Superbike Class as they return to the Superbike Cup to run their Yamaha R1 for local rider Kevin Madigan.

Daracore is one of the UK and Ireland’s leading concrete cutting, drilling and demolition specialists operating out of Irish depots in Kildare and Cork as well as two UK locations in Hatfield and Wembley. The company, have previously backed individual riders competing in Ireland and at the British Superbike Championship, but since 2020 have expanded their involvement with the Masters by running their own team while also investing in the championship. Daracore owners Keith and Brian Farrell will use their involvement with the Masters to grow the Daracore brand while also entertaining clients and staff at race events.

Alongside their sponsorship of the championship, Daracore will continue to support the Superbike Cup challenge of former Pre-Injection and Classic Superbike front runner, Kildare man Kevin Madigan. The reduction in track time during 2020 and 2021, due to the global pandemic, saw the team revert to the Supersport class while developing their Superbike Yamaha. With the bigger bike now sorted they will be back in the premier class for 2022, with Kevin looking to challenge for the Superbike ‘Cup’ once again.

Speaking of their continued Championship sponsorship, Daracore co- owner Keith Farrell said “We set up our team in 2020 as we wanted to put more of our support into the local scene and then decided to back it up by also supporting the championship. Following two years of reduced activity we are really looking forward to using our involvement this season and to entertaining our guests at Masters events, where we also aim to be front runners in the Superbike Cup. Being able to invite our guests to an event where we also have an involvement with a rider such as Kevin adds an extra bit of focus to the day along with increased interest and excitement.”

Fergus Brennan of the Masters Championship also spoke about the return of Daracore, saying “Keith and Brian from Daracore have really stuck with us through the lockdowns and event cancellations of the past couple of years and we are really grateful for that. We’re always happy to work with sponsors who are keen to promote their involvement and who are so hands-on. For them the dual approach of lending their name to the championship along with running a highly professional competitor such as Kevin Madigan, provides a great platform to promote their business. We wish them every success with their Superbike campaign this season and with their sponsorship activities.”

The Masters Superbike Championship kicks off with two days of pre-season testing at Mondello Park on March 26th and 27th followed by rounds one to three at the same venue at the end of April.