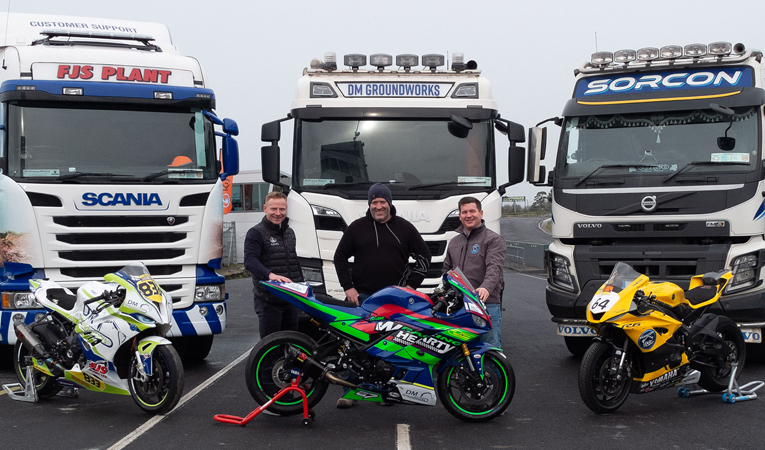 Ireland’s top up and coming young Motorcycle racers will have a prestigious and well funded new award to battle for in 2022, as a number of businesses operating in the Construction, Plant and Machinery sectors have come together to help the best young Irish racing talent build their careers.

The new Masters Superbike Championship ‘Future Stars’ award will be backed by DM Groundworks, FJS Plant and Sorcon Plant Ltd., with a €5,000 plus prizefund set to be awarded to the top, under twenty, racers from this years Masters series.

The ‘Future Stars’ prizefund has been put in place thanks to the support of new and existing Masters Championship sponsors, who were looking to invest in the future of the sport. The aim of the award is to assist young Irish racers financially, as they take the next step in their careers, while also identifying a new Irish International Motorcycle Racing star. The winner of the award will receive help and assistance with the next stage of their career and a prize package provided by Dunlop Masters Superbike competitor, Declan Madden of DM Groundworks, former Superbike ‘Cup’ Champion, Frank Smyth of FJS, and Neil Delaney of Sorcon Plant Ltd.

The unique award format will, for the first time in an Irish Motorcycle Racing Championship, see riders who are twenty years old or younger battle against each other even though they are competing in different racing classes. A points system which rewards riders for the number of competitors they finish ahead of will incentivise those racing in the more competitive classes and will reward the riders who have had to battle hardest for their success. Riders will also score points for finishing in the top three of any race with six bonus points available for a win, four for second and two points for third, whatever number of starters there are in their race.

All riders who are twenty years old or younger at the beginning of the first race of the season will automatically be eligible for the award. At the end of the season the points scored by each rider will be tallied using the same format as the overall Masters Championship, with riders counting their best three weekends from the first four events of the season along with all points scored over the final two events of the year. The top three overall will receive awards, with the winner receiving the biggest cash prize and the title of ‘Future Star’.

For more information on the Masters Superbike Championship and the Future Stars award see the masters web site www.masterssuperbike.ie or follow the championship on our social media channels.