Superbike racers combine to back up and coming Motorcycle Racers 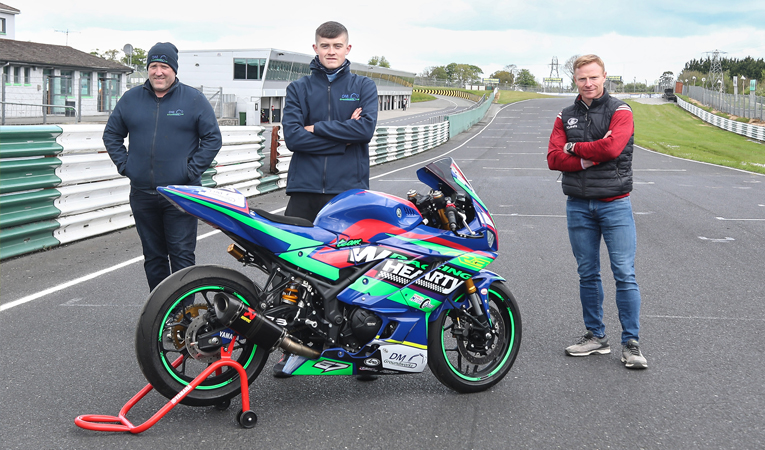 Riders in the Dunlop Masters Superbike Championship Junior classes will have a new incentive to perform at their best during 2021, as for the first time the championship for young novice racers will have a substantial end of season prize fund, thanks to two new sponsors. Current Masters Superbike racer Declan Madden of DM Groundworks and former Masters Superbike Cup Champion Frank Smyth, of FJS Plant, will join forces this season to support Irish Motorcycle Racing’s stars of the future. The two race enthusiasts will jointly provide backing for the series to the tune of €3,000, with €1,500 split between the top three in each category at the end of the year. DM Groundworks, based in Meath, have provided Groundworks and site clearance services to the Irish construction Industry for more than twenty years, operating a fleet of modern high spec machinery suitable for any size project. Located in Kildare, FJS Plant specialise in sales, repairs and spare parts, for all plant and are agents for a number of top machinery brands, including Kubota and Liugong. Having returned to racing in 2019 following a couple of years away, Declan Madden decided that he wanted to put something back into the sport through sponsorship. Following discussions during the shortened 2020 season a plan to direct support towards young racers was put together and in early 2021 Declan was joined by former Masters competitor Frank Smyth. Once the championship was certain to begin In June a decision was made to back the Junior Championships with an end of season prize fund and that has now become a reality with the announcement of the 2021 awards. Speaking about their backing of the Masters Junior competitors Declan commented. “I was enjoying my return to the sport and felt that I wanted to put something back into the championship, so I spoke with the series promoters to see what could be done. Following our discussions we decided that backing for the Junior classes, through an end of season prize fund, was the best way to go, and I’m looking forward now to seeing the results.” “Declan told me what he was planning and it was something I’d been thinking of too, so I decided to join him.” explained Frank. “FJS continue to back Kevin Keyes, who has raced successfully in the UK for number of years, but we wanted to back the next generation too, so joining forces with Declan and the Masters was a great fit for us. The end of season prize fund is the best way to reward the young racers for their efforts and we hope that our financial contribution can help to further the careers of the riders who come out on top”. The Junior Supersport and Moto1 Championships will run over fifteen races at the five 2021 Masters events and at the end of the year the top three in each class will receive €750, €500 and €250 respectively. To follow the championships progress, see the Junior Classes section of the Masters Superbike Championship website, www.masterssuperbike.ie.