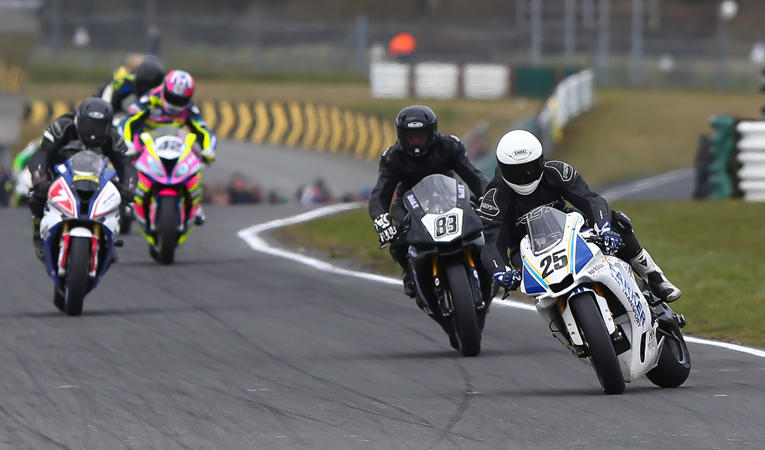 In front of a record crowd the 2018 Dunlop Masters Superbike Championship served up some quality racing during an incident packed season opener. The Superbike spoils were shared by Kilkenny’s Richie Ryan and Charles Stuart, with Ulsterman Stuart taking two wins to the single victory for reigning Superbike Champion Ryan.

The Dunlop Supersport division produced its usual close battles with two new winners taking the spoils as Dean McMaster finally broke his Masters duck with a pair of victories, while Emmet O’Grady making a return after a five year lay-off took the other win.

Saturday’s opening Superbike race was led away by the Yamaha R1 of Charles Stuart. The leaders advantage lasted until lap six when Ryan set the fastest lap of the race as took over at the front. Stuart fought back in the closing stages but Ryan held on by three tenths of a second. Peter Moloney completed the podium coming home first of a trio of BMW’s followed by Luke Johnston and Brian McCormack.

The first attempt to run race two was red flagged and on the restart Ryan slotted in behind Stuart and was looking comfortable until the red flags flew once again. With the competitors returned to the pit lane and some unable to access their tyre warmers as the track temperature began to drop, the riders requested that a result be declared and race two not restarted, which left Stuart as the winner from Ryan and Moloney.

Ryan finally got away in the lead for the last race of the weekend but an error at the start of lap three saw him slide off, leaving Stuart as leader with Moloney second and a hard charging Brian McCormack third. The gaps between the top three opened and closed as the race progressed, especially as they encountered back markers, but Stuart held on to take his second win and the championship lead. Moloney took his third podium of the weekend with Brian McCormack making a welcome return to the rostrum in third place. Former Supersport ‘Cup’ champion Gary O’Brien made a return to the winners enclosure as he took a hat trick of Superbike ‘Cup’ victories.

The first Supersport race of the season saw class stalwart Dean McMaster finally take his long overdue maiden Masters win. Second went to the returning Emmet O’Grady who took fastest race lap but could not close the gap to the winner, while Aaron Wright battled back to third following a slow start. McMaster took his second win in race two but only after a tough battle with O’Grady, which was decided when the Kerry man fell off. Wright improved to second with impressive Cup competitor Keelim Ryan taking third.

The final Supersport race was the closest fought of the three as McMaster, Wright and O’Grady fought over the lead. McMaster faded mid race leaving a fantastic scrap between his two main rivals. Having swapped places a number of times in the final two laps it was Wright who crossed the line first from a slowing O’Grady. The reason for O’Grady appearing to give up on the final lap became obvious afterwards, as it was announced that Wright had passed him under Yellow flags at the final corner. With a penalty applied to the young Ulster rider O’Grady was declared the winner from McMaster and Keelim Ryan. Ryan’s third place completed a hat trick of Cup victories for the Offaly man.

In the main support class, the Principal Insurance Pre-Injection championship, Kevin Madigan took his first win from Enda Delaney and Jonathon Gregory in Saturday’s opener. Sunday however was all about Ian Prendergast who beat Madigan to the flag in races two and three as he too took his first ever race wins. Enda Delaney completed a hat trick of podium finishes with two third places, having never previously made the rostrum in eighteen seasons racing.