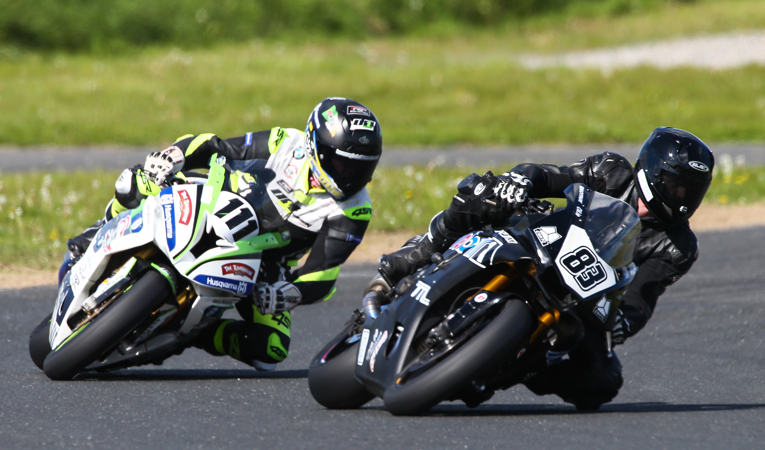 Kilkenny’s Richie Ryan was back to his best at Rounds 10 – 12 of the Dunlop Masters Superbike Championship at Mondello Park this weekend (July 27th & 28th) as he took two wins and a second place to grab back the championship lead from his Antrim rival Luke Johnston by a single point. In the Supersport championship, Cork’s Raymond Casey continues to lead the way but his margin is now reduced as Waterford rider Brian McCormack took a hat-trick of wins.

McCormack took Superbike pole on his ON1 Racing BMW, from the Mobil 1 Yamaha of Ryan and Johnston’s Unlimited Industries BMW and by mid way in race one it looked like the Tramore man would continue the dominance he showed on his last visit to Mondello Park as he led from Ryan. A strong late race challenge from the reigning champion almost stopped McCormack but he held on to win by three tenths of second, with Johnston third.

Ryan’s strong pace in race one gave him pole for race two which he converted into an early lead over McCormack. The top two battled it out for the entire race but it was the Kilkenny man who took the spoils despite a number of overtaking attempts by McCormack. Johnston came home third ahead of Dubliner Thomas O’Grady and the much improved TAG Honda of Emmet O’Grady from Tralee. The final race grid saw Ryan, McCormack and Johnston line up on the second row but the reversed grid did not last long as by the end of lap one, McCormack was once again hounding Ryan with Johnston third. By half distance the three were nose to tail but at the flag Ryan held them both off to take his second win of the weekend, grabbing back the championship lead from Johnston in the process. McCormack’s strong weekend moved him into fourth place in the points right on the tail of Thomas O’Grady. The Superbike Cup battle produced two more wins for Joe Grant and one for Dean O’Grady, while three second place finishes helped Frank Doherty keep Grant in sight in the championship chase.

McCormack was also in Supersport action, this time on his Megabikes Yamaha R6 and he took pole position from Casey and Limerick man Andrew Murphy. Away from the lights the pole sitter was immediately into a lead he would hold onto until the flag while behind the battle for second went right down to the final corner. Having finished third six races running, Murphy was in determined mood as he out-braked Casey into Southside Motor Factors corner on the last lap to finally grab a runner up finish. Mark Conlin made a welcome return to the series picking up fourth place as he dialled himself in to the unfamiliar Dunlop tyres.

For race two Casey got away in the lead and he put in his best run of the season to hold McCormack off for almost the entire race distance. Once again however, he was caught out on the final corner and just failed to grab his first win of the season as his Waterford rival out-braked him on the outside and then hung on to do the double. Behind them Conlin caught and passed Murphy to take an impressive podium on his series return.

In race three it was the turn of Murphy to battle with McCormack and he managed to hold the lead until lap four before the order changed. Despite the new leaders dominance of the two previous races he was unable to break away from Murphy and once again the race came down to a last corner battle as Murphy tried around the outside and then cut back to the inside for the run to the flag, just missing out on the win by less than a tenth of a second. Casey closed in on the leaders in the final stages following a bad start, finishing third, ahead of Conlin.

Casey’s third place in race three kept him clear at the head of the championship while Murphy lost his second place to McCormack by a single point. In the cup class Darryl Sharkey was the big mover as a trio of wins moved him ahead of Trevor Landers in the standings to sit just eleven points behind Ian Prendergast.

The first Principal Insurance Pre-Injection race also saw Sharkey on the top step of the podium with Ivan Oxley second and Cian Donaghy third. Mechanical issues for Sharkey in races two and three restricted him to a single seventh place finish as a pair of wins for Oxley ahead of Donaghy and Murphy moved him into championship contention.

The PCRS Twins races saw the return of former champion Dave Butler on a newly built Supertwin Kawasaki and he was back in winning form straight away, taking victory in the opening two races from Ross Irwin. A fall for Butler in race three handed Irwin his eighth win of the year while Barry Sheehan and Michael Gillan were the other riders to make the podium. In the Production class Robert O’Connell took three wins to close in on the top two in the championship, Jamie Collins and Jason Cash. Collins retained his lead with three second places, while Cash overcame some mechanical difficulties to grab the last spot on the podium in all three races.