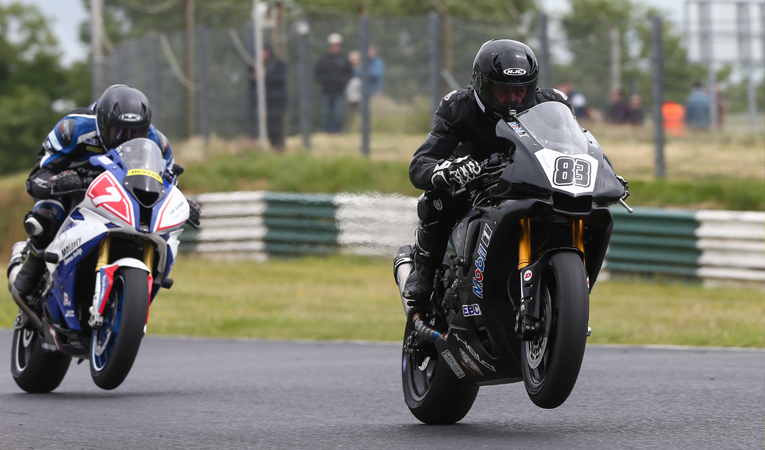 Richie Ryan tightened his grip on the Dunlop Masters Superbike Championship with another hat-trick of wins on the Mondello Park National Track over the weekend of June 16th and 17th. The Kilkenny rider was pushed hard by Waterford’s Peter Moloney and Ballymena’s Luke Johnston but still increased his 2018 tally of Superbike wins to nine. In Supersport the returning Jason Lynn, from Maghera, showed his class as he took three dominant victories over the championship regulars. Ryan’s Mobil-1 backed Yamaha started from pole for race one on Saturday and led from start to finish, in an unusually uneventful race, to take the win from Moloney and Johnston, with Mullingar’s James Kelly fourth to equal his previous best finish. Superbike race two saw Moloney in very determined mood as he took the lead around the outside of Pole man Ryan at the first corner. Pushing as hard as he could Moloney kept his BMW in the lead as the Unlimited Industries BMW of Johnston pressurised second placed Ryan. At the start of lap nine Ryan finally got by but had Moloney on his tail for the remainder of the race as he held on to win by less than a tenth of a second from the Waterford rider with Johnston third. The final Superbike race saw Ryan leading away from the start once again but this time Moloney was all over his rear tyre. Moloney pushed hard and pressurised the leader until an off on lap seven ended his challenge. Johnston then took the fight to the Ryan but had to settle for the runner-up spot, less than a second back. James Kelly took his best result yet and his first Superbike podium by bringing his new Suzuki home third. The opening Superbike ‘Cup’ battle went the way of Michael Prendergast, from improving rookie Jamie O’Keefe and championship leader Gary O’Brien. O’Keefe went one better in race two to take his first win and become the sixth different winner of the season while Prendergast came home second and closed the championship gap to O’Brien, who failed to finish. Chris Campbell emerged from a titanic battle to take the win in race three ahead of O’Brien while Dean O’Grady made a long overdue return to the podium in third place. Supersport was a Jason Lynn benefit as the 2017 Young Racer of the Year showed his class to take three easy victories on his return from the Thundersport Championship. Dean McMaster followed him home in race one with Emmett O’Grady third. The championship top two then swapped places in the second race before O’Grady gained some championship ground in race three as he again finished second while McMaster crashed out. Eoin Collins took three Supersport Cup wins to close the gap to series leader Keelim Ryan. Ryan minimised the damage by making the podium in each race taking two seconds and a third. Kevin Baker and Trevor Landers took the remaining podium places with Baker second in race one and third in race three, while Landers pipped him to the final podium spot in the second encounter. Ian Prendergast took three dominant Principal Insurance Pre-Injection wins, while his usual sparring partner, Kevin Madigan, had an off-day. Madigan picked up one solitary eight place allowing some new names to make the podium. Jonathan Gregory took one second place and two thirds, and was joined on the podium by Cian Donaghy, Anthony Lillis and in the final race by Gerard Doyle who was delighted to finish second and make his first trip to the podium. The Dunlop Masters Championship now heads into its longest break of the year before returning to the Mondello Park National Track on August 4th and 5th.