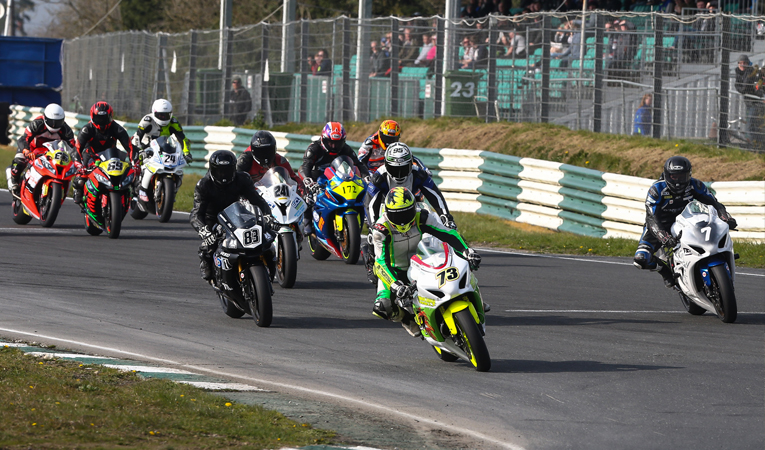 The 2019 Dunlop Masters Superbike Championship pays its first visit to the full Mondello Park International Track this weekend, May 11th & 12th, as the riders chasing glory in the tenth season of the popular championship tackle rounds four, five and six. As always the Dunlop Superbike class will be where most of the attention will focus, particularly with Richie Ryan on his Yamaha R1, pushing to become the first rider to win three Superbike titles and the first to do three in a row. Lining up against him will be at least a dozen Superbike Pro riders and another twelve of the fastest Superbike Cup contenders.

Having taken his maiden victories on the International Track last season, BMW mounted Luke Johnston will be aiming to repeat the feat and kick start his challenge for the championship. Riding a brand new Suzuki, Peter Moloney will also be out to break his run of second place finishes by finally getting the better of Ryan. Moloney will not be the only Suzuki rider with that aim, as regular podium finisher James Kelly looks capable of making a move towards the top step, while highly experienced Derek Wilson, on his return to the Superbike class will also be looking to make forward progress with his Suzuki.

Emmet O’Grady, riding the latest TAG Racing Honda Fireblade is another rider who will be aiming to move up the order following a difficult start to the season. Emmet will have to battle past the likes of his EICL BMW mounted namesake Thomas O’Grady, top Kawasaki riders Jamie O’Keeffe and Chris Campbell, and Supersport Cup graduate Keelim Ryan if he is to move up the order. Also in the mix will be the fastest Cup riders, Dean Fishbourne, who ran in among the front runners last time out, and Cup championship leader Joe Grant.

The Supersport class is the main support to the Superbikes and following a lean season in 2018 the grids have been growing with the introduction of some new riders and returning riders on new machinery. Having damaged his Superbike at the season opener Andrew Murphy will make his Dunlop Masters Supersport debut this weekend, riding a Yamaha R6 loaned to him by Twins Championship sponsor PCRS Bikesport. Murphy will go up against championship leader and current ‘Young Racer of the Year’, Caolán Irwin, on a later model Yamaha, and his closest challenger following the opening event, Kawasaki mounted Raymond Casey. Also likely to figure at the front of the field will be Luke O’Higgins and Dave Butler as well as the top ‘Cup’ class racers Darryl Sharkey, Kevin Dempsey and Ian Prendergast.

The Dunlop backed championships will also be supported by three rounds of the Principal Insurance Pre-Injection class, which had three different winners at the opening event in April. The PCRS Twins Championship, which is led by Ross Irwin, brother of BSB stars Glen and Andrew will also continue its campaign with three races, as will Junior Cup and Junior Supersport. Sidecars, with two races on Saturday and one on Sunday, and the combined grid of Lightweight Supersport and Classic Superbikes, who will race on Saturday only, complete the line-up.

Adult admission to the second Dunlop Masters Superbike Championship event of the season is just €12.50 booked in advance, with on the day admission set at €15.00 and under 16’s admitted free. All admission includes a complimentary event programme. The event can be followed on www.masterssuperbike.ie with live timing available all weekend and live streaming TV coverage of Sunday afternoon’s racing.