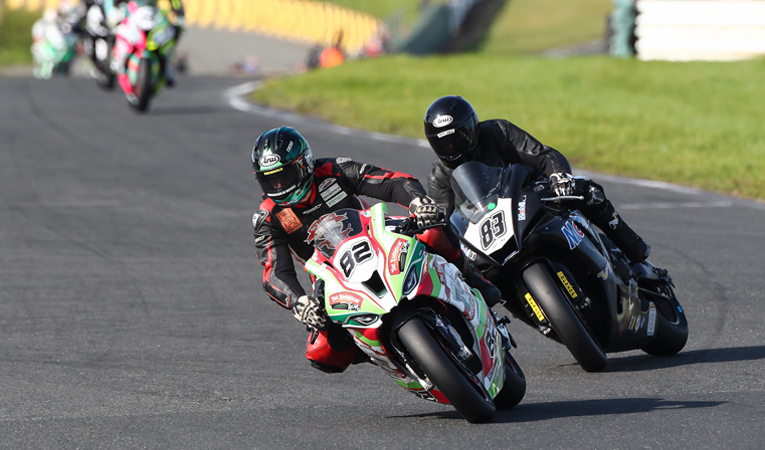 The long awaited return of the Dunlop Masters Superbike Championship saw Richie Ryan and Derek Sheils share the Superbike wins on the Mondello Park National Track, over the weekend of September 19th and 20th. The two former champions matched each other blow for blow all weekend, to leave Mondello Park tied for the top spot in the championship.

Ryan, champion for the last three seasons, set the pace in qualifying to line up on pole for Saturday’s pair of races. Riding his Yamaha R1 the Kilkenny man opened up an early lead in both encounters but Wicklow based Sheils fought back on each occasion to push Ryan all the way to the flag. Both riders were running extremely fast laps pushing to near lap record pace while dropping third placed Luke Johnston who had initially been on their tail.

With Sunday’s grids based on Saturday’s race times, Sheils grabbed pole position for races three and four by three thousandths of a second. The Roadhouse Macau backed BMW rider then made the most of his starting position to take the lead and hold on to win both races, thereby matching Ryan’s weekend points haul. Johnston, on his Unlimited Industries BMW held of the rest of the field to make it four third places in a row and grab third in the standings.

The concurrent Dunlop Superbike ‘Cup’ races looked like being a Shane Connolly benefit when the Cavan rider took victory in the opening three races, but a non-finish in the fourth meant he left the season opener with a slender six point advantage over Daniel Matheson, who took his first two Superbike Cup podiums. Victory in race four went to first time winner Stephen Magill who also claimed the first win at the Masters for Aprilia.

The Supersport races were unusually drama free, as Mike Browne took his Kawasaki to four easy wins. 2019 championship runner-up, Andrew Murphy, had a new Triumph at his disposal but was unable to match Browne as he took a run of three second places to finish up the weekend second in the standings. Michael Sweeney took the other second place while three third place finishes was enough for Luke O’Higgins to finish the weekend third in the points.

Class debutant Jamie Collins impressed on his graduation from Production Twins to the Supersport ‘Cup’ as he took four straight victories. The remaining podium places were mainly shared between Robert O’Connell, who was also making his Supersport debut, and Stephen Tobin, with Jonathan Gormley and James Walsh also taking a third place each.

The Masters returns for its second and final event of the season on October 16th and 17th where four more rounds will complete the shortened 2020 championship.