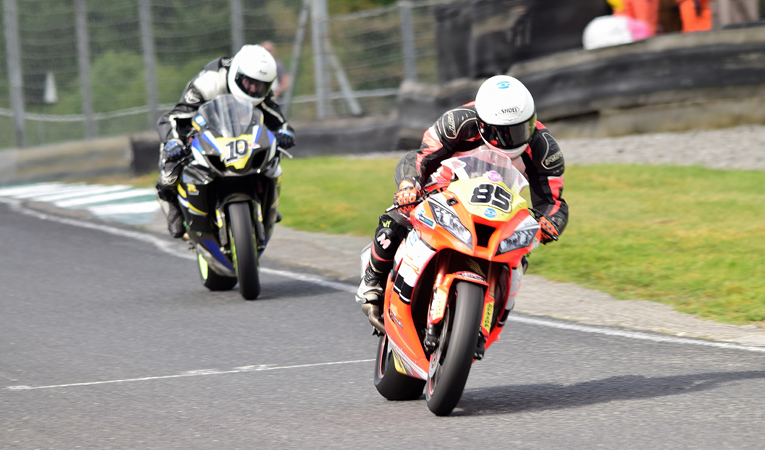 With four days to go to rounds 13 to 15 of the 2019 Dunlop Masters Superbike Championship, the penultimate event of the season is set to attract the biggest entry of the year so far. The eighteen round championship will return to the Mondello Park’s National Track on August 24th & 25th, for the final time this year, before completing its season on the International Track at the end of September.

Following two season of domination by Kilkenny’s Richie Ryan, the headline Superbike class looks likely to go down to the wire this year as Ryan currently has just a single point advantage over Antrim’s Luke Johnston. Johnston, riding his Unlimited Industries BMW is on the best form of his time in Superbikes having taken two wins and eleven podiums to lead Ryan’s Mobil 1 Yamaha R1 up until Round 12 when the reigning champion grabbed that single point advantage.

The top two may be having it all their own way in the championship standings, due to the other front runners having inconsistent seasons, but they have had to battle hard for every point they have scored. Peter Moloney is out of contention for the title but cannot be counted out of taking his first race win on his Suzuki, as he has been getting quicker all year. Jamie O’Keefe and Thomas O’Grady have also been regulars on the podium and both could be close to stepping into the winners circle if things go their way.

The Superbike Cup has been a battle between Dungarvan’s Joe Grant and Kerry rider Frank Doherty all season, but these two will have to watch out for a new name this weekend. Having almost tied up the Supertwin championship, Ross Irwin will make his Masters Superbike debut this weekend and if the relative newcomer, older brother of BSB stars Glenn and Andrew, continues his progress he could be one to watch.

Supersport will see the championship battle continue between Andrew Murphy and Raymond Casey with no Brian McCormack to get in their way. Limerick man Murphy just failed to beat McCormack at the last event, missing out on his maiden win by less than a tenth of a second and will be out out break his duck and close the gap to his Cork rival this time around. The Supersport Cup battle will be enlivened by the return of Michael Owens who will start as favourite to take the wins and close the gap to Ian Prendergast and Darryl Sharkey in the title chase.

Strong grids of Principal Insurance Pre-Injection and PCRS Twins competitors will also do battle over the weekend with these classes joining the Superbike and Supersport divisions in having one race on Saturday and two on Sunday. Classic Superbikes and Moto 400 will join the action for Saturday, Junior Supersport and Junior Cup will race twice on Saturday and once on Sunday while Sidecars will have two races each day.

Tickets for the Masters Superbike Championship weekend are available for just €10:00 on-line until midnight on Thursday August 22nd, with under sixteen’s admitted free. Ticket prices on the day of the event will be set at €15.00. All admission includes free grandstand seating and an event programme and racing will get underway from midday on Saturday and 10:30 on Sunday.

To book your tickets at the reduced price of €10.00 use the promo code Masters5 when checking out, HERE.