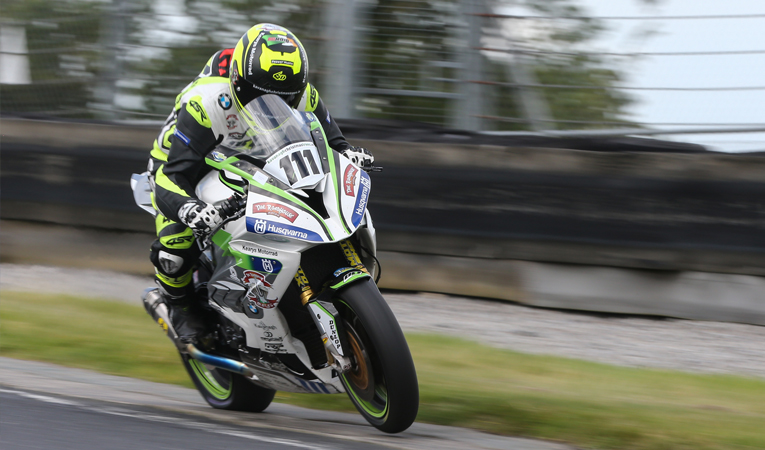 The Dunlop Masters Superbike and Supersport competitors will head for the Mondello Park International track next weekend, September 28th & 29th with both titles still up for grabs. The 2019 Superbike title will be a straight fight between the championship top two, Kilkenny’s Richie Ryan and Antrim’s Luke Johnston, while the Supersport crown will be decided between two Munster men, as Cork’s Raymond Casey and Andrew Murphy from Limerick go head to head.

While much of the Interest in the final three rounds of the 2019 Dunlop Masters Superbike Championship will centre on the Superbike and Supersport title fights, the entry will also benefit from some interesting additions which will add to the battles at the head of the field.

The Superbike class will be joined once again by Tramore’s Brian McCormack, who has made occasional appearances at the Masters this season, with some success, as he has taken four wins and two second places from his six starts. Also rejoining the lead battle will be the returning Peter Moloney, who has been out for two events following a testing accident. The Dungarvan rider was fastest of all in pre-event testing in July, before his accident ruled him out for six races, and he is hoping to carry that speed forward into the final rounds.

Among the other interesting additions to the field will be two of Ireland’s fastest young racers who will make a return from competing at the front of the British Superstock 600 class to join the Mondello Park grid. Donegal based Young Racer of the Year Caolán Irwin, and former Masters Production Twin and Supersport Cup champion, Derry’s Eunan McGlinchey, will continue their season long rivalry as they tackle the Superbike class for the first time. With the Kawasaki 636 machines they both use being ineligible for Irish Supersport they will instead step up to the bigger engined class where they will be hoping to create an upset. The Superbike ‘Cup’ class is also up for grabs with Dungarvan’s Joe Grant and Kerryman Frank Doherty as the remaining championship contenders.

In Supersport Casey and Murphy will have their eyes firmly on each other in the title race but they will also have to watch out for another British Championship returnee, Rhys Irwin. Caolan’s younger brother will be out to match his achievement from his Supersport debut earlier this year, when he took a debut win while still classed as a ‘Cup’ competitor. His performances in June saw him upgraded to Pro so he will leave the Cup battle to the current series top two, Darryl Sharkey from Cavan and Tipperary rider Trevor Landers.

Following a very competitive season the Pre-Injection and Production Twin championships are both set to go down to the final race. The Principal Insurance Pre-Injection class has four riders still in with a mathematical chance of lifting the crown, Colin Murphy, Darryl Sharkey, Cian Donaghy and Ivan Oxley, while the PCRS Bikesport backed Production Twin division will be contested by three riders, Jamie Collins, Robert O’Connell and Jason Cash. Also still to be decide are the Moto 400, Junior Supersport and Sidecar battles.

The action gets underway on Saturday morning with qualifying, followed by Race one for all classes. Following Sunday morning warm-up the remaining races will run, with the decisive final round for each class on Sunday afternoon.

Tickets for the weekend’s action are available at reduced prices HERE.