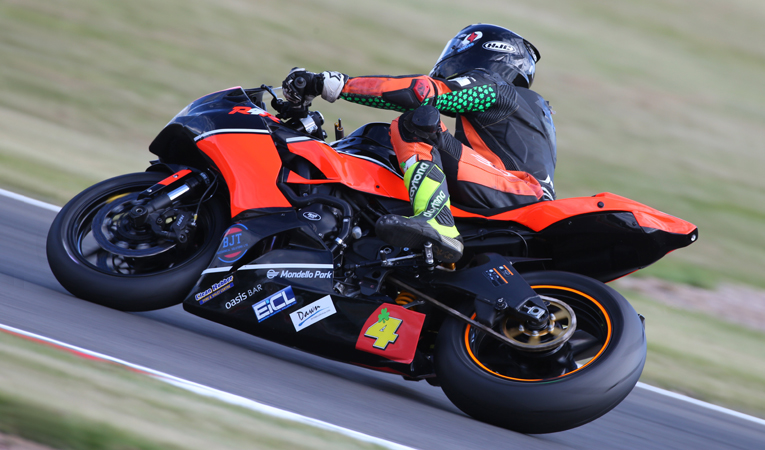 Irwin, from Kilmacrennan County Donegal is representing the Young Racer of the Year sponsors in the British Championship this season, on a brand new Kawasaki ZX6. Having finished building the new machine just before the opening event of the season, track time has been limited, meaning the team headed to Donington still trying to get to grips with the bike.

Practice began on Friday with Caolán sitting ninth after the first session. Changes for the second session did bring an improvement in time, but not in position, as the young racer found himself down in thirteenth place. Further overnight suspension changes got things going in the right direction for qualifying as Caolán put in his best lap of the weekend to grab seventh place on the grid. The final run before the race was a practice session on Saturday evening and in this Caolán improved again to go third quickest, just three tenths of a second off the fastest time.

The improvements across practice and qualify meant that Caolán was full of confidence for the race and it was not long before he was making progress. Having initially dropped to eight he was back up to seventh on lap three and closing in on sixth. A succession of consistently quick laps saw the Irish racer match the pace of the race leaders as he caught and passed the rider in fifth place.

Next on Irwin’s radar was fourth, but with four laps to go he began to encounter steering difficulties and had to back his pace off to make sure he made it safely to the flag. By the end of the race the Donegal rider had dropped to sixth and his disappointment was obvious as he passed the flag. Once back in the paddock an issue with his steering damper was found and under the circumstances he was then happy that he had made it to the finish.

“Its been a very positive weekend for me”, Caolán stated after the race “To get to where we finished from where we were at the start of the weekend is a credit to the team. If it wasn’t for my mechanical issues I know I could have had fourth place and maybe even sneaked a podium. With the bike improved so much I feel I’m ready now to really start to repay the investment of the Young Racer award sponsors, Mondello Park, Dawn International, EICL and the BSB. We’ll go to Brands Hatch in two weeks time with a lot more confidence now we have a good base set up so I cant wait for the next event.”