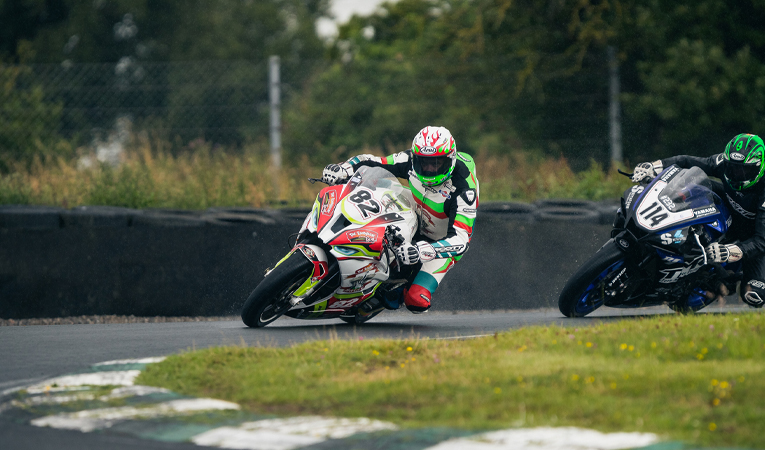 The 2022 Dunlop Masters Superbike Championship is set for a Grandstand finish as it heads into the Shoot Out, the final two events of the season, with four riders in contention for the Superbike Championship. The new points scoring rules have created the closest title race in the championships history and now just over fifty points separate the top four with one hundred and fifty points still up for grabs. The Supersport class is also incredibly competitive with five riders covered by just forty points at the top of the standings.

The penultimate event of the season, August 27th and 28th on the Mondello Park National Track, sees riders begin the count down to the September championship finale. The final six races of the year will not only be the Masters Championship deciders, but will also count as the Motorcycling Ireland ‘Southern Star’ Championship, with separate awards provided by the MI Short Circuit Committee.

Heading to the penultimate event of the season, Derek Sheils leads the way in Superbike with the Wicklow rider having taken five wins on his Roadhouse Macau BMW. Second in the standings is one of three riders who took their first Superbike wins this year, Dubliner Thomas O’Grady on the EICL Yamaha, Alan Kenny from Cavan on a Yamaha R1 and Kerry’s Emmett O’Grady on the VTL TAG Racing Honda Fireblade. A remarkable fourteen riders still have a mathematical chance of taking the title but in reality it will be fought out between the current top four. The Superbike Cup battle will most likely be between Andrew Whearty, Jamie Collins and Daniel Matheson, the only three riders to win a race this season, who have less than fifty points separating them.

The Supersport championship is led by Emmett O’Grady, this time on a Harris Group Yamaha R6, just thirteen points clear of AKR Thomas Bourne Racing’s Josh Elliott, from Fermanagh. The championship leaders have made good use of the new Masters points scoring system, which sees riders counting just three of the first four race weekends, as they both missed events at the start of the season. Sitting third is the star of the season so far, County Down teenager A Jay Carey, who also leads the Supersport Cup and the Future Stars Championship for young racers. The final two riders still in contention are Antrim’s Jonny Campbell and Jack O’Grady from Kerry, who is also in contention for the Supersport Cup title.

The Principal Insurance Twins classes also remain close at the top going into the Shoot Out. Thomas O’Grady’s NW Racing Aprilia leads the similar Nedar Heat backed machine of Kerryman Darragh Crean, with Cork’s Mark Quilligan best of the rest. The Production Twin title looks likely to go right down to the wire with Dublin’s Nathan McGauran and Wexford based Brandon Kavanagh locked in battle all season. The top two need to be careful however as a maiden win for Gareth Morrell in July has pushed the Ulster rider into contention. McGauran’s performances have made him A Jay Carey’s closest challenger in the race to be crowned Future Stars champion and the fight for the top Junior award looks to be between these two.

Of the remaining classes the most interesting contest could be in the DM Groundworks and FJS Plant Junior Supersport Championship where the battle between youngsters Rossi Dobson, Nicky Burns, Jack Whearty and Adam Brown will continue right to the final race in September. Reuben Sherman Boyd is unbeaten in the concurrent Moto 1 class and looks likely to tie that title up before the end of the season. The Pre-Injection race is between Carlow brothers Noel and Liam Dunne, veteran Derek Wilson is well clear of the field in Classic Superbikes, while the Moto 400 battle remains between the regular top two battlers Damien Horgan and Andrew Murphy. Last but not least the Sidecar battle is headed by Dylan Lynch and Aaron Galligan, ahead of Darren O’Dwyer and Mark Gash with Derek Lynch and Anthony McDonnell next up.

Tickets for the August 27th and 28th Dunlop Masters at Mondello Park are now on sale and can only be purchased on-line in advance. Further in formation on the penultimate Masters event of the season can be found on mastersuperbike.ie and the championship’s social channels.