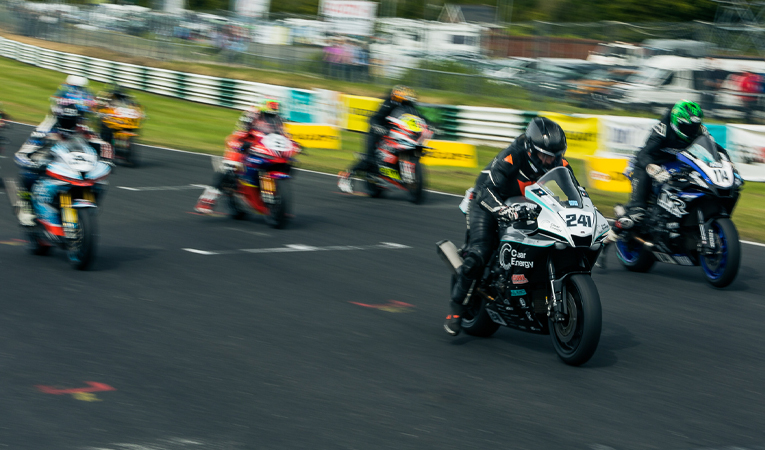 The Shoot Out for the 2022 Dunlop Masters Superbike Championship is set to be the most hotly contested in the championships’ history, as Ireland’s top Motorcycle Racing series heads to its final event with twelve of the fourteen categories still to be decided.

The final weekend of the season takes place on the Mondello Park International Track on September 24th and 25th, with each class racing three times and all championships concluding on the Sunday. Spectators will be able to watch Sunday’s conclusion both Live! and on the Megabikes Superstore Ballymount Big Screen. The screen will be situated opposite the Main Straight Grandstand and will show the Maxus and Harris Group livestream on Sunday, ensuring that fans wont miss any of the drama as the championship Shoot Out unfolds.

In the premier Superbike class four riders are still battling for the title. Having started 2022 without a race win Dubliner Thomas O’Grady, riding the EICL Yamaha, has now racked up three wins from the last six races to move into the series lead. The 2021 runner-up takes a slender three point advantage into the Shoot Out, with former champion Derek Sheils, on the Road House Macau BMW, as his closest challenger.

Sitting third is Yamaha mounted Alan Kenny from Cavan, with the experienced racer having also opened his win account this season. Kenny is currently twenty four points in arrears but with three races left and twenty five points for a win he can’t be discounted. The final rider with a chance of victory is TAG VTL Honda mounted Kerryman, Emmet O’Grady. O’Grady would need all of the top three to have disastrous weekends in order to lift the title, but anything could still happen. The Superbike ‘Cup’ for less experienced riders is a two-way fight between Corkman Jamie Collins, on his Suzuki, and the BMW of Meath’s Andrew Whearty. If both riders were to run into problems the only other racer who could pick up the pieces is County Down’s Daniel Matheson.

The Supersport division has been finely balanced all season and is now down to just three contenders following Ulster teenager A Jay Carey’s crash, which put him out of all three races at the August event. With Carey out of the picture, three riders can still be the champion, but more than likely the title will go to either the AKR Thomas Bourne Racing Honda of former British Superbike race winner, Fermanagh’s Josh Elliott or Emmett O’Grady on the Harris Group Yamaha R6. Waiting in the wings in case the top two slip up is nineteen year old Antrim racer Jonny Campbell with his Magic Bullet Yamaha.

Despite crashing out in August, Carey still remains in contention in the Supersport ‘Cup’ class. Tralee’s Jack O’Grady leads the way by twelve points, from Carey, with Wicklow’s Dean Lacey also in the mix. Meath man Jason Floody and Cavan’s Darren Clarke still have a mathematical chance of taking the title but in reality they will be targetting Lacey’s third place.

Just two championships have so far been decided. Noel Dunne Junior has wrapped up the Pre-Injection 600 class, with the Carlow man taking nine wins and five seconds from fifteen rounds. Also secure in his division is Junior rider Reuben Sherman Boyd. The thirteen year old has been unbeaten so far in the DM Groundworks and FJS Plant Moto 1 Junior Category and will come to Mondello Park looking to keep up his 100% record.

Amongst the supporting cast a number of battles stand out as ones to be watched. The season long tussle in the Principal Insurance Production Twin class has produced many photo finishes between the top two, Nathan McGauran and Brandon Kavanagh. McGauran currently holds the lead and only needs to finish directly behind Kavanagh in each race to be crowned champion. In Supertwins Thomas O’Grady currently has his NWR Aprilia twenty three points clear of Masters sponsor Darragh Crean with his similar Nedar Heat backed bike. The Future Stars championship for riders aged twenty and under is led by Nathan McGauran from AJ Carey, Rossi Dobson and Reuben Sherman Boyd, with all four in contention for the €5,000 prize fund which will be split amongst the top three.

With so many Masters championship titles up for grabs and riders also battling for the Motorcycling Ireland Southern Star trophies, the final weekend of the 2022 Dunlop Masters should be a cracker. For all the Shoot Out information see HERE.