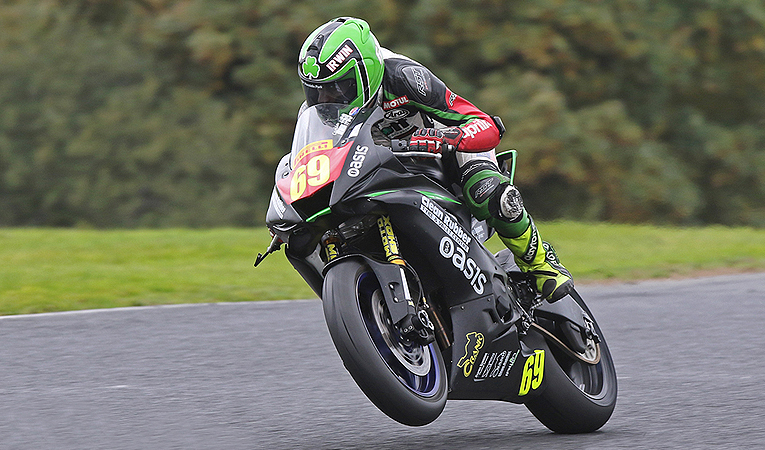 Following a long and tense wait for the 2018 nominees, since the final shoot-out on October 24th, Caolán Irwin was announced as the recipient of the 2018 ‘Young Racer of the Year’ title at the Dunlop Masters Superbike Championship awards ceremony at the Westgrove Hotel in Clane, County Kildare on Saturday night, November 10th. Irwin, from Donegal, follows in the footsteps of previous winners, Jason Lynn and Robert English as he picks up a prize package of support worth more than €10,000, to assist him in furthering his Motorcycle Racing career. The biggest award in Irish Motorcycle Racing is in its third season and once again benefits from backing from the late Martin Birrane, who passed away in June of this year, Pat Crowley of Dawn International and Peter McMahon of European Industrial Chillers Ltd.. During 2018 the award assisted Jason Lynn to progress his career into the Thundersport GB Championship, culminating in a debut British Supersport Championship appearance at the final round in Brands Hatch in October. Caolán Irwin began 2018 with the aim of racing in the British Superbike supporting Superstock 600 championship, alongside a campaign in the Masters Supersport Championship, but date clashes saw him compete at the Masters on just two occasions. His first appearance, in April, produced three scintillating performances and a hat-trick of second place finishes, despite riding a Superstock machine against the more powerful Supersport bikes. His speed and the quality of his riding secured the ‘Young Racer of the Year’ nomination for April and a place in the October shoot-out. A second visit to Mondello Park in October produced another runner-up spot before the twenty year old finally took his maiden Supersport win in the second race of the weekend. With the seven Masters events completed and seven riders nominated, the decision on who would be crowned the 2018 Young Racer of the Year was made at a one day shoot out, which took place at Mondello Park in late October. During the shoot-out the riders were put through their paces, both on and off the track, with each nominee being assessed in a number of areas. The on-track assessment made up half of the marks awarded, with the other half being split across the two off track categories. Experienced racers Jeremy McWilliams and Jim Halligan assessed the riders ability with their bike, both in the garage and on the track, quizzing them in the garage before observing them from a number of locations around the circuit. Motorcycling journalist and track instructor Paul Browne, assessed each riders presentation of their past and future careers, while communications consultant Gerry Dawson assessed the nominees on their media skills. When the points from all categories were totaled Irwin came out on top, ahead of what judges described as the closest and best prepared field of nominees so far, having impressed the judges across all categories and scored highest in the track skills and career portions of the assessment. Following the shoot out, the participants had to wait until Saturday night’s awards ceremony to hear the result, which was announced as the final award of the night. Speaking after the announcement Caolán Irwin said, “I cant believe I’ve won this award. This will make such a difference to our plans for next year as we now have the backing to commit to returning to the BSB paddock. Finding funding for Motorcycle racing in Donegal is extremely difficult but this award will hopefully help us to secure the remaining funds we need to complete a full season again next year. I have so many people to thank, not least of all my family who have funded most of this years campaign and allowed me to be in a position to win this award. I have to thank the judges and Mondello Park for organising this fantastic competition and I’m looking forward to representing the sponsors to the best of my ability during 2019.” Jim Halligan, representing the competition judges, also had this to say about Caolán and the standard of the competition in general. “The standard was the highest we have seen so far in the competition and we believe our choice of winner should get to the very top, as will many of the nominees. But unfortunately there can only be one winner. Mondello Park, the competitions supporters and the winner Caolán Irwin will agree a plan for the next stage of his career over the coming weeks and are all looking forward to working together to help Caolán continue his progress in the British Superstock championship. For more information see www.masterssuperbike.ie/young-racer-of-the-year.