Dunlop Masters Superbike Championship gearing up for round two 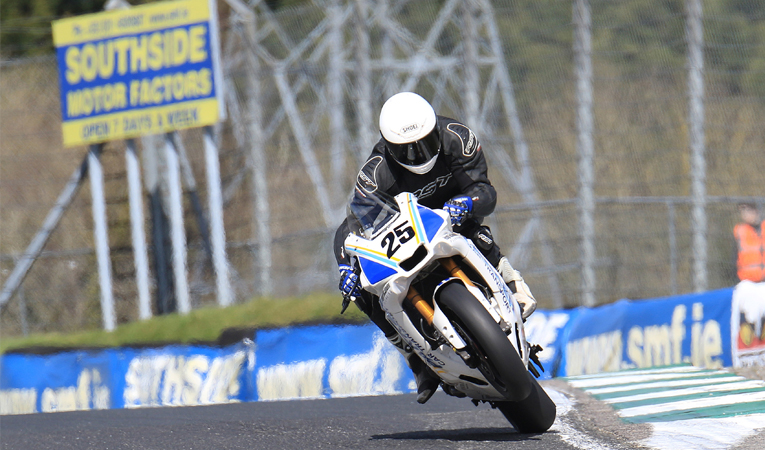 The second event of the 2018 Dunlop Masters Superbike Championship takes Ireland’s biggest Motorcycle Racing series back to Mondello Park to race on the National Track. Rounds four, five and six will take place over two days on Saturday April 28th and Sunday April 29th at the County Kildare venue.

Heading into the second event of the season, the 2017 top two, Kilkenny’s Richie Ryan and Antrim’s Charles Stuart, are once again at the head of the Superbike field. The two Yamaha R1 riders took up where they left off last season as they shared the wins at the season opener, with Stuart taking two to Ryan’s one. Next up is a trio of BMW riders as Dungarvan’s Peter Moloney, Luke Johnston from Portadown and Tramore’s Brian McCormack battle to stay with the Yamahas. It’s another BMW which leads the Superbike Cup, in the hands of former Supersport Cup champion Gary O’Brien from Limerick.

It was all change at the head of the Supersport grid last time out as two new names were added to the winners list. Ballymena rider Dean McMaster took his maiden win in the opening race and then followed up with the race two victory before Emmett O’Grady from Tralee stood on the top step of the podium for the first time in the final race of the weekend. Offaly man Keelim Ryan was also a first time winner in the Supersport Cup class and having taken his maiden win on Saturday he followed up with two more on Sunday.

This weekend will see the usual three championship encounters for Superbike and Supersport with Sunday’s races being the focus of the programme. All four feature races will be concentrated into Sunday afternoon along with one race for each of the Support classes. The best grids of the supporting races will come from the Principal Insurance Pre-Injection class and the Sidecars, with the three wheelers having gone through a major resurgence this season with entries doubling over last year.

Alongside the main event the paddock will also have plenty to catch the interest of spectators. There will be Drifting displays by Drift Games who will also be offering passenger rides. The pit-lane will be opened to spectators during the lunch break offering a chance to meet the riders and get a closer look at their machines and the newly refurbished bar and restaurant will be open for business along with our new paddock Coffee area.

Tickets are available at the reduced price of just €12.50, booked on-line, with under sixteen’s admitted free.

For the event timetable see HERE.